Fairer Federal representation for the ACT

When the original Constitution of Australia was drafted, States were guaranteed an equal number of Senators and a minimum of five members in the House of Representatives. The intent was to ensure that States with bigger populations could not disregard the will of the smaller States.

The ACT does not have any similar guarantees in the Constitution (like all other Territories including the Northern Territory, Christmas Island, and Norfolk Island). For years, Territories have been under-represented despite the implicit constitutional goal of providing all States and Territories with fair rights to representation.

The arrangements for Territories have changed many times over the years, since the rules around Territory representation are set by the Federal Parliament itself. Initially, Territories had to fight just for the right to sit in the Federal Parliament, and even then had no rights to vote. It was only 50 years ago, in 1966, that the ACT’s then sole representative received full voting rights.

At present, the rules use a population quota based on the number of citizens in the States and the number of Senators elected by the States. If this calculation produces a fraction of more than half a quota for a State or Territory, it gets rounded up. Then, the Australian Electoral Commission divides each State or Territory into seats of roughly equal size, based on expected population growth or decline.

The problem is that when this formula is applied to Territories, the population of seats can get very large or small compared to the rest of Australia. In 2003, special legislation was rushed through to prevent the Northern Territory from having just 1 seat with a population of 200,000 while Tasmania still would have received five seats despite each of them only having one-third the population. 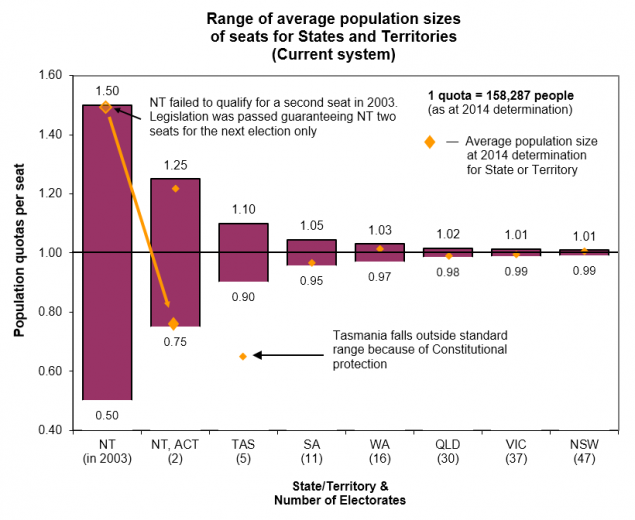 The ACT population is growing relative to Australia but it has not quite reached the magic figure of 2.5 quotas to get a third seat. On current projected figures from the ABS, the ACT will get its third seat back in the next 15 years.

Even if this prediction comes true, I think we can do better. A decade ago, my husband Stephen and I wrote a proposal that was submitted to a 2005 Joint Standing Committee inquiry. Our idea was to modify the rules for Territories to cap average seat sizes at 10% above than the national average. It is inequitable for us to be disadvantaged compared to the constitutional protections granted to the States. A 10% cap also provides a simple formula that avoids the need for reference to things like “twice the standard error of the measure of the Australian Statistician’s estimate of the net undercount”. 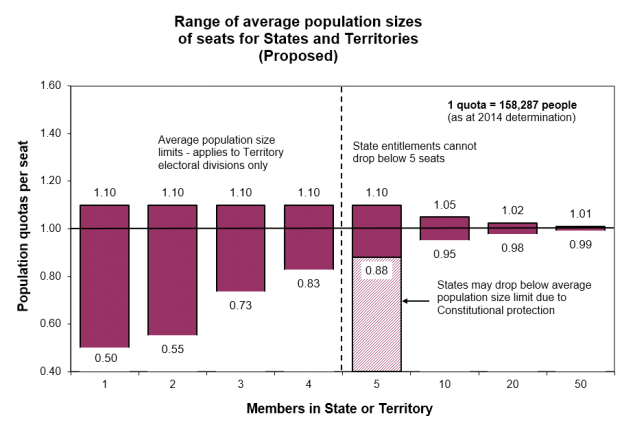 At the time the idea received a positive reception from noted psephologist Malcolm Mackerras and we met with Senator John Faulkner to explain our ideas – but unfortunately they did not go any further.

Territories are also under-represented when it comes to the Senate. At the last election, an ACT senator required 75,469 votes to be elected, compared to just 24,408 votes for a Tasmanian senator. With the population of the ACT expected to overtake the population of Tasmania in less than 25 years, it is getting harder and harder to justify Tasmania’s 12 senators to the ACT’s two.

A simple option for addressing this issue is to allow Territories to elect 1 Senator per half quota of population. Under this arrangement, NT would get three Senators and the ACT four, and likely five within the next 15 years.

It is not easy to progress these issues at a federal level when the rest of the Australia doesn’t really pay much attention to the ACT. However, with more representatives and especially more Senate seats in play, Federal political parties would have a much bigger interest in campaigning in the ACT during elections. Getting fairer representation for the ACT is important for us – even if it is something that we will only achieve with patience and over time.