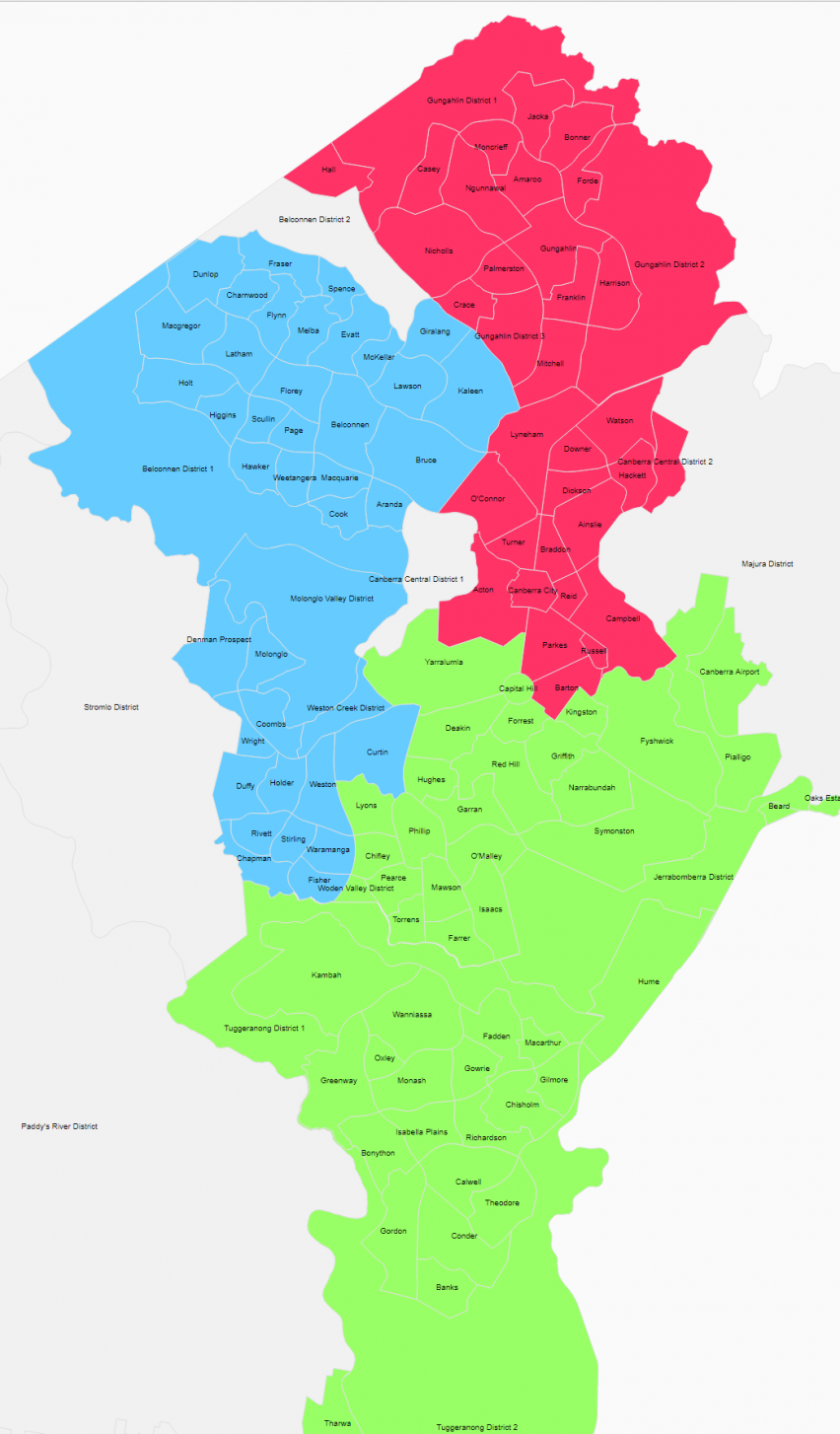 The last time the ACT had three federal electorates, a “sandwich” approach was used to draw the boundaries. The seat of Fraser was placed north of the seat of Canberra, with the seat of Namadgi below.

While ABC election analyst Antony Green is predicting a similar arrangement this time around, this would ignore the natural geographic features used to form the seats, and social developments in Canberra over the past 25 years.

Electoral boundaries are drawn taking size and community factors into consideration. The Australian Electoral Commission must consider physical features, where people live and work, and how they travel. It’s not just a matter of getting out a pen and a ruler.

In 1994, Gungahlin had just a handful of suburbs and the Molonglo Valley didn’t exist. Belconnen was almost entirely made up of standalone housing. The electorates were divided by Bruce Ridge to the north and mostly by Farrer Ridge and Isaacs Ridge to the south.

Until recently, the lack of shopping options in Gungahlin made its residents frequent visitors to Belconnen. It made sense to consider Belconnen and Gungahlin as socially connected.

But as the vitality of the Gungahlin town centre has increased, its ties to Belconnen have weakened. When light rail comes online in early 2019, the effect will be transformational. Gungahlin, Dickson and Civic will develop stronger residential, recreational and employment links as light rail becomes a convenient travel option. The apartment-dwellers along Flemington Roadd and Northbourne Avenue will have far more in common than the families living in established suburban houses in Belconnen.

At the same time, when the John Gorton Drive dual carriageway linking the Molonglo Valley to Belconnen is completed along with the suburb of Whitlam, Belconnen and the Molonglo Valley will become more connected. There will be a significant increase in traffic between the two town centres as people take advantage of better shopping options and seek to avoid peak-hour traffic by working in Belconnen. The fact that children living in the upcoming suburb of Whitlam may use Weetangera School and Belconnen High as their local schools will further strengthen these ties.

The “Y model” of seats is a better fit geographically as well. Barton Highway and Bruce Ridge would partition the ACT to the north; Cooleman Ridge and the Tuggeranong Parkway will become the boundaries to the south. A “sandwich” approach would require awkwardly cutting out parts of Belconnen or Gungahlin to make the numbers add up.

Having electorates that represent, as far as possible, cohesive communities of interest is important for a well-functioning democracy. In this exciting new time for the ACT, we shouldn’t complacently assume that past arrangements will be the best for the future.

Share
Previous article « The universal right to shelter
Next article CT Editorial: Canberra’s wealth is in the eyes of the holders »