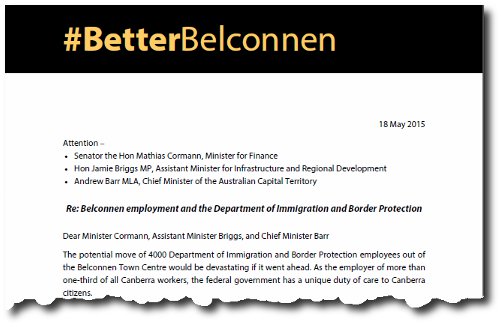 This open letter has been sent to:

The potential move of 4000 Department of Immigration and Border Protection employees out of the Belconnen Town Centre would be devastating if it went ahead. As the employer of more than one-third of all Canberra workers, the federal government has a unique duty of care to Canberra citizens.

Now that Finance has taken responsibility for the Commonwealth property portfolio, it is pleasing that Minister Cormann’s press release of 11 May 2015 agrees that ‘local impacts’ need to be taken into account. However, the Commonwealth can still unilaterally act in a way that seriously damages the ACT.

As such I am requesting three commitments from you:

I look forward to your response.

UPDATE: The Chief Minister responded to my open letter on 30 June. His full reply can be viewed here.