Belconnen and Gungahlin may soon get their own federal parliamentarian 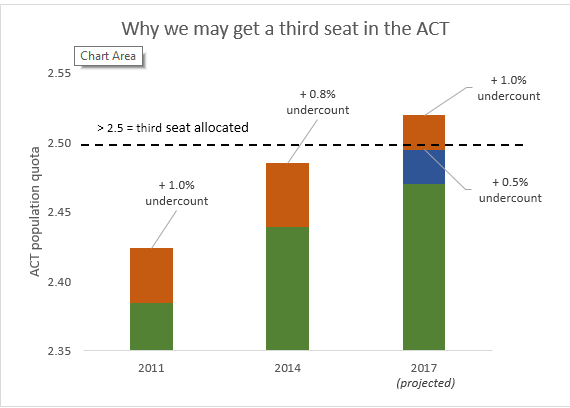 With strong growth taking Canberra’s population past 400,000, the ACT may be allocated a third federal seat this year. Like in 1996, there is a chance that this third seat will only exist for a single parliamentary term. Any new representative will have a strong incentive to ensure Canberra continues to thrive and grow, so as to lock in this extra seat.

Next week, the Australian Bureau of Statistics will release its December 2016 population estimates. These will be the first that incorporate the results from last year’s census. Because all population data is inherently imprecise, the bureau will also calculate the highest and lowest probable population for each state and territory, based on its calculated “undercount”.

The Australian Electoral Commission uses the highest probable population when calculating how many seats the territories have. This means the accuracy of the census will potentially affect whether the ACT gets a third seat. Based on ACT and national population projections, an undercount comparable to the last two census rounds, in 2006 and 2011, would lead to a third seat. The prominent technology failures on census night and calls to boycott completing the census due to its requirement to collect name data on forms will add uncertainty to the outcome.

The electoral commission must produce its determination on seat entitlements on or soon after August 30, 12 months after the first sitting day of the current Federal Parliament. To ensure public confidence in the result, it would be appropriate for the ABS to publish detailed workings of its calculations. All eyes will be on the bureau and the commission to ensure their approach is transparent and accountable.

It’s more important than ever for the ACT to have extra federal politicians. With the Turnbull government moving jobs out of the capital to other electorates in blatant pork barrelling Canberrans’ voices need to be heard. Belconnen and Gungahlin are especially at risk. The proposed move of 4000 Immigration Department jobs out of Belconnen in 2015 would have devastated the local economy and sent businesses there broke. Similarly, there is an ongoing need for sustainable employment in Gungahlin. Basing a federal department in that town centre would benefit all Canberrans. These issues are quite different from those that inner Canberra faces and require their own representation.

Our city is evolving. Four out of 10 Canberrans have at least one parent from a non-English-speaking country. Canberra’s population ranks third in cultural and linguistic diversity behind Melbourne and Sydney. More than 2000 people from culturally and linguistically diverse countries migrate to Canberra every year. These new citizens are transforming the city. We need strong advocates for a modern Canberra, to continue building its reputation as Australia’s most liveable city.

These factors highlight again how ACT residents get a raw deal in the Federal Parliament. We have the most populous electorates in the country, and the least political representatives per head of any jurisdiction. Tasmania receives a constitutionally guaranteed 17 federal representatives (five MPs and 12 senators) compared to just four for the ACT, even though the ACT’s economy is 30 per cent larger. We also have a comparable population to Tasmania, though ours is growing rapidly while Tasmania’s is stagnating.

The current rules are unfair. The ACT and NT should be guaranteed seats that are no more than 10 per cent higher in population than any other state’s electorates. Our lack of senators is also highly inequitable. It only makes sense when you remember that the constitution was drafted at a time the ACT didn’t exist and the 1901 census counted only 864 people in the Northern Territory.

We should continue to push for improved Senate representation but, in the meantime, a third federal seat in the House of Representatives will provide the voice the ACT has long deserved.